Today the blog of the Centre for Child Protection at the Pontifical Gregorian University features an article I wrote on "Healing through the Liturgy: Insights from Vatican II." I am grateful to contribute to the center's mission and look forward to assisting it further in March, when I am to be among ninety scholars from around the world participating in a conference on how theologians can help the Church confront abuse.
Posted by Dawn Eden Goldstein at 3:16 PM Links to this post

Where my books are being used to help people heal

This past week, I was delighted to see news pop up on the web concerning different places around the country where my books on healing from trauma and abuse are being used to help people.

In New York City, the archdiocesan website recommends my book My Peace I Give You: Healing Sexual Wounds with the Help of the Saints as a resource. New York joins a number of other dioceses around the country that recommend My Peace I Give You to survivors of sexual abuse, including Washington, DC, and Los Angeles.

And in Milwaukee, the School Sisters of St. Francis are sponsoring a March 7 Lenten retreat where Sister Mary Carroll, OSF, DMin, is drawing upon my books. Judging by the press release, it looks like I'll be in outstanding company:


According to Sister Mary, “At the retreat, we will view Jesus, the ‘wounded warrior,’ while examining the art of Andrei Rublev, Rembrandt van Rijn, Marc Chagall, and Salvador Dalí. Pope Francis points out that the face of Christ appears in the poor and the suffering.

“Yet, seeing with our spiritual eyes brings healing,” she continued. “We will draw on examples of this healing from Catholic authors Dawn Eden Goldstein and Caryll Houselander.”

Posted by Dawn Eden Goldstein at 11:56 PM Links to this post

A Vatican visit and other blessings 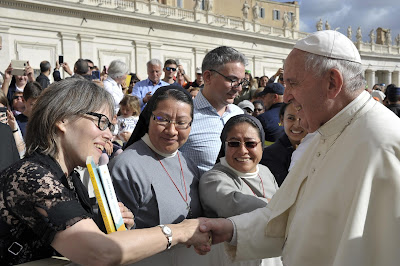 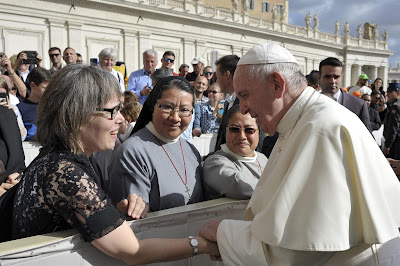 On October 16 I had the great blessing of meeting Pope Francis at a Wednesday audience. Here is how I described the encounter on Twitter:

Two days ago it was my joy to give the Holy Father translated editions of two of my books on healing from trauma: My Peace I Give You in Italian & Remembering God's Mercy in Spanish.

Of the books that I gave the pope, My Peace I Give You: Healing Sexual Wounds with the Help of the Saints is the one that has had the greatest impact. I've been gratified to see it translated not only into Italian but also into Spanish, Slovak, Polish, and, as of this month, Hungarian. 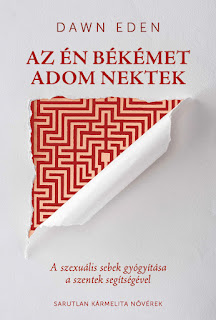 This artful new edition of My Peace I Give You is published by the Discalced Carmelite Sisters. Military Bishop László Bíró wrote a lovely preface for it (which I was able to read online with the help of Google Translate).

It means a great deal to me to be able to reach a Hungarian audience with my writings on healing, and I am eagerly looking forward to meeting my new readers there when I do a speaking tour in that country this coming summer. In the meantime, I am thankful to be speaking closer to home on February 13, when I address young adults at St. Dominic's Parish in Washington, DC. Details on that event and other upcoming talks will be posted on my Events page.

Many thanks to you who check in with me here at the Dawn Patrol and on my Facebook and Twitter pages. Please know that you and all my readers are in my prayer intentions every day. May God bless you this Christmas season and throughout the New Year. Please pray for me too!
Posted by Dawn Eden Goldstein at 12:28 AM Links to this post

Falling in love with the good, the true, and the beautiful


Homiletic & Pastoral Review has a beautiful review by Father Christian Raab, O.S.B., of my memoir Sunday Will Never Be the Same. He writes that the book has "a striking narrative which, like a good mystery novel, invites the reader to make discoveries alongside the protagonist and not before her." And he adds,

I especially appreciated this insight of Father Raab's:


A case can be made that the book turns upon Goldstein’s reading of Chesterton’s The Man Who Was Thursday. Chesterton describes a conversation between an anarchist poet and a “poet of law and order.” The latter says: “It’s things going right that is poetic,” and “the most poetical thing in the world is not being sick.” Goldstein seems to have, by this point, already intuited that while much of rock music celebrates chaos and focuses on nihilistic despair, some of it, like the Boettcher music she has fallen in love with, manages to communicate the true and the good and the beautiful. Chesterton gives her a conceptual framework for better understanding her own taste and the impetus to more fully pursue what the good poets are pointing to.

Note: If you purchase Sunday Will Never Be the Same or any other book through the Amazon links in this post or elsewhere on this page, I will receive a commission that I will donate in its entirety to support the HER Foundation's volunteer corps, which assists pregnant women who suffer from hyperemesis gravidarum. Thus far in 2019, I have donated $115 to the HER Foundation thanks to Dawn Patrol readers' Amazon purchases.
Posted by Dawn Eden Goldstein at 11:58 PM Links to this post

Austin Ruse, the C-Fam president who has lately aligned himself with what he admiringly calls the "western chauvinists" known as the Proud Boys, in an op-ed appearing today on the Crisis website, accuses me of publicly countering what I see as "anti-Francis heresy."

Yes, that is correct. Ruse is excoriating me for standing with the pope.

But the most surprising thing about the Crisis piece is that it is presented as some kind of grand exposé about me, as if there has been a radical new development in my outlook. Sorry to disappoint those who think so, but the truth is that in all essentials I am still the same Catholic as I have always been, since my conversion in 2006 — and I have been dealing with online outbursts against me for over a decade.

Yes, I hate to break the news to Austin, but he has come very late to the anti-Dawn party. I was attacked for defending the Church’s pro-life, pro-chastity, and pro-marriage teachings after becoming a Catholic, and have since been attacked, as a theologian, for criticizing Christopher West’s distorted and highly sexualized presentation of St. John Paul II’s Theology of the Body. I have also been attacked for defending Catholic teachings against female ordination and gender ideology.

Here I am in August 2018 defending the male priesthood before a thousand members of the Georgetown University community and their guests —watch at the 1:18:07 mark. It did not earn me any employment offers from Jesuit colleges.


So, now I am being attacked for defending the legitimacy and authority of the Supreme Pontiff. Normally I would not consider an article such as Ruse's worthy of a response. However, since friends have contacted me who were troubled by it, here are a few points readers should consider:


What Ruse doesn't mention is that Sophia Institute Press publishes Crisis magazine, where his article appears. That's an important piece of information that belongs in the article itself — not merely in the small print at the very bottom of the page.

That is all I have to say. Please join me in praying for the Holy Father and for the unity of the Church. Mater ecclesiae, ora pro nobis.
Posted by Dawn Eden Goldstein at 7:38 PM Links to this post

Last Saturday, I had the honor of delivering the annual Edith Stein Guild lecture last Saturday at St. Patrick's Cathedral in New York City. The topic I chose was "Sponsa Christi: What Edith Stein Taught Me About the Mystery of Spiritual Motherhood." It was a joy to speak about a saint who inspires me on many levels.

Although I mention some aspects of my personal history that are touched upon in my memoir Sunday Will Never Be the Same, this lecture is almost entirely new.

An audio version of the lecture is available for free download via my SoundCloud page and the player below.

Posted by Dawn Eden Goldstein at 12:36 AM Links to this post


It's not every day that I'm invited to speak at St. Patrick's Cathedral, but that is the wonderful news that I am now able to share with you, as the Edith Stein Guild has invited me to deliver its annual lecture on Saturday, August 3, at the glorious Gothic seat of the Archdiocese of New York. My topic is "Sponsa Christi: What Edith Stein Taught Me About the Mystery of Spiritual Motherhood." Please see the flyer on the Edith Stein Guild website for details.

Tomorrow I begin an eight-day Spiritual Exercises retreat. You and all of my readers will be in my prayers. Please say a prayer for me.
Posted by Dawn Eden Goldstein at 12:22 AM Links to this post 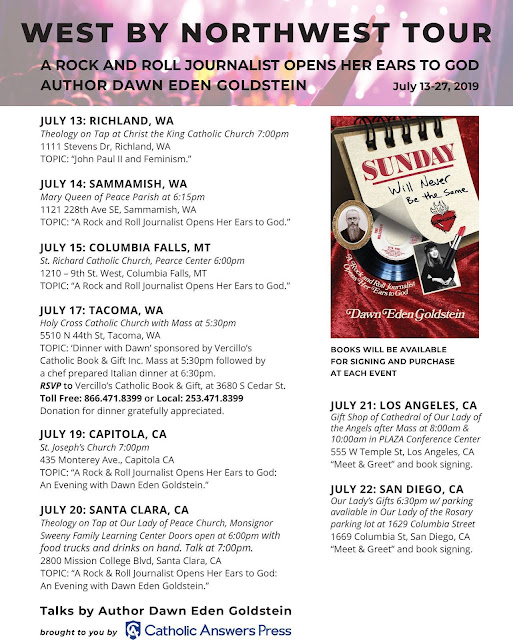 I'm excited to begin my West by Northwest speaking tour this week, which will have me speaking and signing copies of my memoir Sunday Will Never Be the Same in Washington, Montana, and California. Click the flyer above for details and see my Upcoming Talks page for the latest updates.
Posted by Dawn Eden Goldstein at 7:09 PM Links to this post