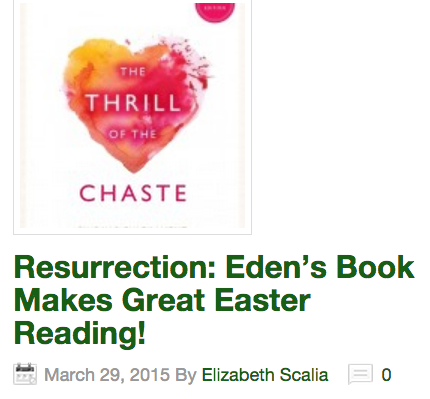 I had quite the beautiful surprise this Palm Sunday morning, as I awoke to find that Elizabeth Scalia had written on her blog The Anchoress that my new book The Thrill of the Chaste (Catholic Edition) "may well prove to be the perfect read during the upcoming weeks of Easter."


The promised freedoms of the sexual revolution having led her to a narrow and empty place, Dawn Eden began a socially risky pursuit of chastity. What she learned, and chronicles beautifully in The Thrill of the Chaste, are lessons meant not only for single women, but for men, too, and for couples. I think the book can forever change the way you think of “yes” and “no” as the world understands the words.

Eden’s first embrace of Christianity (and her first iteration of the book) had her living as a sign of contradiction against easy consent, even as she sought the husband she was certain God had for her. In this new “Catholic” edition of The Thrill of the Chaste, Eden is still living as a sign of contradiction — the world, after all, still misunderstands chastity as being little more than a dreary and joyless island of “no” — but she has become, also, a rather paradoxical witness to the world of “yes”. Her commitment to chastity and exploration of virtue has opened up for Eden a “yes” of boundless width and breadth, and within its depths reside the contentment and consolations of authentic love, which we all seek.

Read the rest at The Anchoress.
Posted by Dawn Eden Goldstein at 10:06 PM