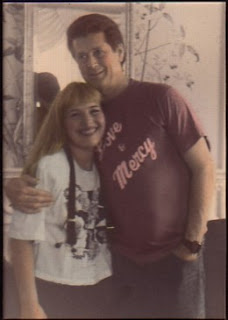 With Brian Wilson, August 1988
The latest issue of the London Catholic Herald features my article "Nowadays, Chastity Is the Ultimate Rebellion," in which I discuss my past life as a rock journalist and share the message of my new book The Thrill of the Chaste (Catholic Edition).

Here is how it begins:

In Wagner’s opera Tannhäuser, a medieval minstrel returns to his village, seeking healing and salvation after having wasted years as the willing slave of Venus. But when his former neighbours learn where he has been, they tell him he has forfeited all hope. Once a man has tasted Venus’s delights, they say, he will never get her out of his blood.

Modern-day Tannhäusers are all around us: men and women addicted to pornography; singles seeking love through sex; and spouses desiring pleasure to the exclusion of procreation. Our Catholic faith teaches that a way of forgiveness and restoration is open to them. Yet all too often we give them up for lost, speaking of chastity as if it were a virtue reserved only for virgins. In doing so, we effectively buy into the culture’s lie that slaves to pleasure will never be able to find freedom in Christ.

It doesn’t have to be that way. Venerable Archbishop Fulton Sheen described a state of disillusioned satedness that he called “black grace” – a kind of fed-upness that could open the way for the “white grace” of conversion. Many who have bought into the lies of the sexual revolution find themselves confronted by the darkness of this black grace. If the truth about chastity is presented to them, they can attain transformation in Christ. I know, because that is what happened to me.

Read the rest of the essay and listen to the accompanying podcast on the Catholic Herald website.
Posted by Dawn Eden Goldstein at 10:43 PM