Sights, sounds, and stories from my South Dakota tour

Today I returned from my first-ever tour of South Dakota, where I delivered five talks in four days. I spoke at college campuses and at the Lake Traverse Reservation, home of the Sisseton Wahpeton Oyate. It was a beautiful experience and I want to share some images and media from it here on the Dawn Patrol, especially since readers of this blog made it possible.

The idea for the tour began last October, when I noticed that one of my Twitter followers was Father Andrew Dickinson, pastor of the Pius XII Newman Center. At the time, I was looking to find an place where I could give a mission talk on healing from childhood trauma, as I had some leftover funds that readers had donated in 2012 so that I could speak on that topic in places that could not otherwise afford to host me. The same fund had earlier enabled me to speak to formerly prostituted women at the Project Dawn Court and to inmates at the Riverside Correctional Facility, both in Philadelphia.

I contacted Father Dickinson and let him know that if he would like me to give a talk on healing, I could provide my own airfare. He wrote back immediately and soon arranged for me to give not one, but three talks on the topic, as well as two talks on chastity. Most excitingly, he was able to arrange for me to speak at Lake Traverse Reservation, which would be my first-ever talk at a Native American parish.

The tour began last Saturday, April 18, at the University of South Dakota, where I gave a talk drawn from the new Catholic edition of The Thrill of the Chaste. (I know what you are thinking: College students willing to come out for a chastity talk on a Saturday evening must be very chaste indeed!) It was a joy to see how engaged the audience was and how interested they were in living their faith more deeply.

I was back at USD the next day to speak on My Peace I Give You. The crowd was small—it was a Sunday afternoon on campus, after all—but those who were there were interested, and several of them purchased copies of my books.

Signing books after yesterday's talk at USD. Many thanks to all who are praying for my South Dakota tour. pic.twitter.com/QSwUBRyST4
— Dawn Eden ن (@DawnofMercy) April 20, 2015

The crowds were bigger at South Dakota State University in Brookings, where about forty people attended the talks I gave on Sunday and Monday evenings. As at USD, the students I met were wonderfully well-catechized and seeking to live Eucharistic lives.

To say "I gave this talk and that talk" really doesn't capture the blessings I received on the tour. Everywhere I went, people were terrifically kind and hospitable. Just one example out of many: In Brookings, Ana, a homeschooling mom who is married to an SDSU professor, took me to the South Dakota Art Museum and afterward to a charming café (check out the French-style cup-bowls).

Detail, "The Prairie Is My Garden," by Harvey Dunn. A kind local mom is showing me the SDSU Art Museum. pic.twitter.com/jnqiGT7UTK
— Dawn Eden ن (@DawnofMercy) April 20, 2015

Finally came the talk that I had most anticipated: speaking at St. Catherine's Parish on the Lake Traverse Reservation in Sisseton. The pastor, Father Jerome Ranek, had done a fantastic job with advance publicity, even placing an ad on the front page of the local paper.

I had long wanted to bring Native Americans the message of My Peace I Give You: Healing Sexual Wounds with the Help of the Saints, as their population suffers a high rate of abuse. Speaking at Lake Traverse also offered the opportunity to address members of a tribe whose population included numerous victims of abuse perpetrated by clergy and religious. (See news stories here and here — but be aware that the articles contain highly disturbing details.)

I gave the same talk I gave at SDSU on the healing love of the Sacred Heart.

Before I arrived in Sisseton, several people, including both non-Native Americans and a member of the Lakota tribe, warned me not to expect many people at my talk, and not to expect those who did come to display emotion. They were wrong. The audience at St. Catherine's numbered thirty-five people—filling the chairs that had been set up—and was the most responsive of the entire tour.

Among those who came were about ten men who I was later told had been brought there by the director of a 28-day treatment program. They were among the most grateful. My joy at being able to provide comfort to them and the others who came was beyond words.

I did not sell copies of my books at this talk. Instead, I gave them away.

By the time I finished signing books, attendees had taken thirty copies of My Peace I Give You and ten copies of The Thrill of the Chaste. I also gave away wrist rosaries and a few polished stones I had purchased at the museum, in case some attendees wanted something other than (or besides) a religious article. Both the rosaries and the stones had been blessed.

I asked those present to take photos so that I could show the donors who made the trip possible how their support was having an effect, and, Lord willing, inspire other reservation parishes to invite me to speak. The Tribal Secretary of the Sisseton Wahpeton Oyate graciously took the following photos, as well as the one atop this post, and sent them to me for publication on The Dawn Patrol. 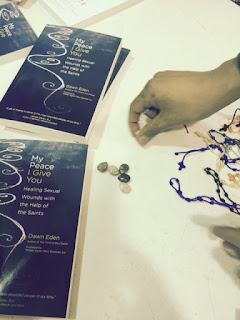 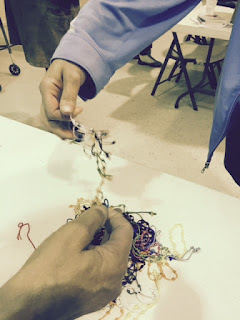 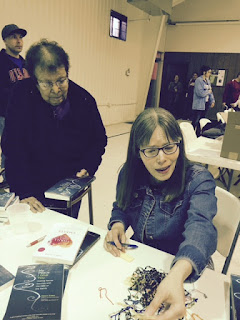 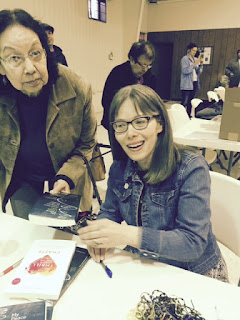 I thank God for this wonderful experience speaking at Lake Traverse and hope and pray that I will have many other such experiences. Next time, I hope also to spend more time on a reservation, getting to know Native Americans and their personal journeys.


* * *
If you are able, please consider making a donation to help me as I continue my doctoral studies in theology and as I continue to share the message of My Peace I Give You. Thank you and God bless you.