New revelations on a little-known aspect of Daniel A. Lord, S.J.'s life 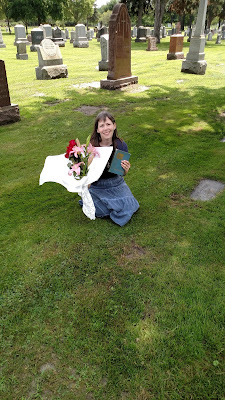 I went out yesterday to Chicago's Mount Olivet Catholic Cemetery to visit the graves of the parents and grandmother of Father Daniel A. Lord, S.J. (1888-1955), the great Jesuit author who is a personal hero of mine, and to whom I dedicated My Peace I Give You: Healing Sexual Wounds with the Help of the Saints. What I discovered there will interest scholars and others who admire Lord's life and work.

In my hands in the photo is Father Lord's biography of his mother, Iva Jane Frances Langdon Lord: My Mother: The Study of an Uneventful Life (St. Louis, MO: The Queen's Work, 1934). He wrote it after his mother's death, because she had requested there be no monument upon her grave, so he decided to honor her wishes but also honor her with a literary monument.

Iva Lord's request went beyond merely asking that her own grave be unmarked. As Father Lord relates in My Mother, in a conversation he had with her less than two weeks before her death, her stated desire was that, after her burial, the headstones be removed from "all three" graves in the family plot: her own; her husband, George D. Lord; and her mother, Margaret Langdon. She moreover wanted the graves to be "sodded over." It was a bizarre request, to say the least. Father Lord writes, "What could I do?" The implication is that he acceded to her request. So, while I was able to obtain the plot's location from the cemetery's helpful staff, I expected to find no headstones on any of the graves.

What I found surprised me in more ways than one. First, the staff informed me that there were four bodies in the plot. The fourth was not Father Lord—he is buried alongside brother Jesuits in the Society of Jesus section of Calvary Cemetery in St. Louis. It was his brother, James G. Lord, whose existence was acknowledged only by scattered, somewhat cryptic mentions in My Mother and his autobiography Played by Ear. Father Lord writes that James was an invalid, and hints that his illness involved mental disability; the first stage of it was the "strange apathy" he displayed as a child. The last bit of historical information Father Lord offers about James is that Father Lord informed Iva just prior to his death that the Sisters of St. Mary had agreed to accept James as a permanent boarder, thereby assuring her that her invalid son would be taken care of after her passing.

Although I could have expected James to be buried in the family plot, the information given me about him by the cemetery (his name and date of burial) enabled me to track down his death certificate, which gives some very interesting new information. 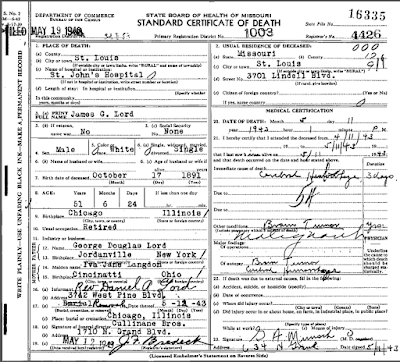 The death certificate reveals that, as a permanent boarder of the Sisters of St. Mary, James received care at St. John's Hospital in St. Louis, which means that he spent the last ten years of his life in the same city where Father Lord was stationed as national director of the Sodality of Our Lady and editor of its publishing house The Queen's Work. So, when Father Lord promised his mother that the Sisters of St. Mary would care for James, he was also promising her that James would live near him. I had not realized that. It was also the hospital where Father Lord sought treatment over the years and where he himself would die on January 15, 1955—eleven and a half years after his brother.

Also, note the cause of death: a cerebral hemorrhage, which had lasted three days, and which was itself caused by a malignant brain tumor from which James had suffered for years. So, Father Lord, who outlived his brother by twelve years, had personally experienced caring for a close family member suffering from cancer. That is significant given that Father Lord's heroic witness in his own battle with cancer has inspired so many people, including Servant of God Dorothy Day.

The other surprise of the visit was that Father Lord, although honoring his mother's wish for no monument, did not in fact honor her wish for the graves of his father and grandmother to be sodded over. Good for him, I say! After all, his mother had no authority to cancel out her husband and mother's wishes. 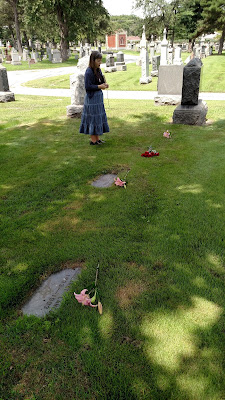 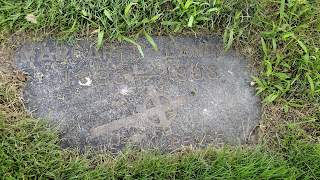 The grave of Daniel A. Lord, S.J.'s grandmother,  Margaret Langdon 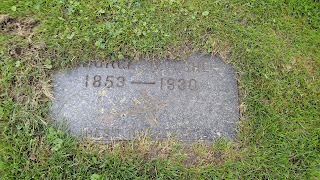 The grave of Daniel A. Lord,S.J.'s father, George D. Lord
I am thankful that Ave Maria Press, which publishes my books, is planning to republish Father Lord's Letters to My Lord, which will bring to a modern audience the beautiful reflections Lord wrote during his final illness.
Posted by Dawn Eden Goldstein at 11:14 AM