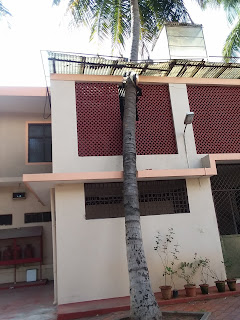 (For background on my India teaching mission, click here, or go here to see all my posts from India.)

Friends who had visited India told me I would find things here to be quite different from anything I had experienced before. I can't think of a better way to express that than this photograph I took on the grounds of the Archdiocese of Bangalore's pastoral center when I spoke at a symposium there last weekend. It shows a generous concern for nature that is part of the Indian mentality but would be shocking in much of the United States. The coconut palm was there when the center was built, so rather than uproot it, the builders simply built around it.

I have not had the chance to blog this week until now because of the demands of co-teaching fifty-one students in an intensive course in person at the Indian Session of the John Paul II Pontifical Theological Institute for Marriage and Family Sciences while simultaneously teaching twenty-three students in three course sections online for my full-time position at Holy Apostles College and Seminary. This update itself must be brief as I need to get sleep in advance of co-delivering ten lectures this weekend at a two-day symposium on marriage and family in Kochi (Cochin). In all my lectures here in India, I am speaking alongside my friend Father Gregory Gresko, O.S.B., who invited me to join him on this his fourth India teaching mission.

Did I mention how glad I am for your prayers?

Before leaving the Bangalore region last Sunday, Father Gresko, our friend Andrea (who took the photo above), and I visited Asirvanam. It's a remarkable Benedictine monastery that, under its current prior, Father Jerome Naduvathaniyil, O.S.B., has within the past two years built a sprawling and visually stunning complex of university buildings on its grounds and filled them with students. Father Gresko and I (pictured above next to the white-habited Father Jerome) gave an impromptu talk to the first-year students at the Divine Grace Nursing School there.


Today was the final day of lectures for Father Gresko's and my class at the JP2 Institute. In less than two weeks, we have given thirty-two hours of lectures, which adds up to a two-and-one-half-credit licentiate-level course (licentiate here meaning an S.T.L. degree). On Monday, we have the honor of administering oral examinations to fifty of our students (the remaining one has an extension until Thursday). It will keep us busy for nine hours. After that, we will remain in India until February 4 to attend (and, in Father Gregory's case, speak at) the International Symposium on "Humanae Vitae: Fifty Years After" and to visit the sisters at the Stella Maris Institute for Development Studies in Kanniyakumari.

After Monday, I'll have a few days of rest before the symposium and will be able to post more about how my mission has gone. I can't even begin to express how much I have benefited from the experience of teaching a class of priests, religious sisters, and laywomen from India and Africa.

Thank you for your prayers and please know that I pray for you.
Posted by Dawn Eden Goldstein at 9:26 AM