Who should be a patron saint for the Vatican abuse summit? Read the English text of my interview for Avvenire 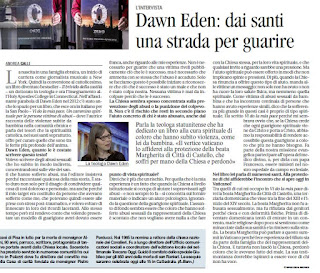 Today, as the abuse summit begins at the Vatican, Avvenire, the magazine of the Italian bishops' conference, features an interview with me in honor of the Italian publication of my book My Peace I Give You: Healing Sexual Wounds with the Help of the Saints. Here is the interview in its original English; the questions are from Avvenire reporter Andrea Galli:

How did writing such a book cost you personally?

The most difficult aspect of writing My Peace I Give You was speaking about my personal experience of sexual abuse. I wanted to write of my own experience only obliquely, focusing instead on stories of saints who suffered abuse, but my original publisher insisted I share some of my own story as well.

Writing about what was perpetrated upon me was hard not only because of the discomfort in sharing something so painful but also because of the effort required to do so in a manner that took readers' sensitivities into account. Given that my target audience consisted of abuse victims like myself who might suffer from post-traumatic stress, I had to be careful not to write in a way that might trigger painful memories for them.

At the same time, I knew that if I were to model healing for readers, I would need to write frankly and honestly about my own experiences. It's not necessary for healing that a victim go public about what took place, but it is necessary that the victim be able to admit to himself or herself that the abuse happened. Only when we do that can we begin to recognize that what happened was evil and it was not our fault. No victim is ever to blame for his or her abuse.

The Church is concentrating on preventing abuse and punishing the abusers. Is there a risk of forgetting the importance of healing the wounds of those who were abused?

I'd say there's more than a risk. In my experience, it is a plain fact that, inasmuch as the Church on an institutional level considers helping abuse survivors at all, it focuses upon providing material or psychological help, ignoring the whole question of spiritual help.

The assumption at work appears to be that those who suffered sexual abuse by the Church's representatives must necessarily not want to be pressured to have anything to do with it spiritually. But spiritual help can be made available in a way that does not involve pressure. What's more, when the Church neglects to offer such help, it sends a message to victims of abuse that not only does the Church not care about their physical safety, it doesn't care about their spiritual well-being either.

In my experience as a victim of childhood sexual abuse and as one who has met hundreds of fellow victims, the greatest sufferings of abuse victims are their spiritual sufferings. I wrote My Peace I Give You because it seemed obvious to me that if we as a Church believe that all spiritual healing both comes from Christ and leads to Christ, then we have a responsibility to make such healing available to those most in need of it. It's part of our evangelical mission to participate in the work of the Divine Physician — or, as Pope Francis puts it, to minister in our ecclesial "field hospital."

In your book, you write about many saints. To which one would you entrust the Vatican meeting and why?

Among the saints in My Peace I Give You, I would entrust the Vatican abuse summit to Blessed Margaret of Castello, a Dominican tertiary who lived during the late thirteenth and early fourteenth centuries.

Although Blessed Margaret was not sexually abused, she was rejected by her parents because she was blind and suffered from physical deformities. As a young woman, prior to becoming a Dominican, she attempted to join a local convent but the sisters there soon felt threatened by her holiness and ended up casting her out onto the street.

Blessed Margaret is an apt saint for the abuse summit because she experienced rejection both from family and from representatives of the Church. Yet she did not leave the Church, and she forgave those who harmed her. She was a woman of great holiness and her witness should inspire us to be voices for the voiceless.

How has your book been received by people who were abused?

I had hoped that My Peace I Give You would show abuse victims that their wounds do not prevent them from receiving the love of Christ. Jesus wishes to heal them not in spite of their wounds but rather through their wounds.

The responses that I have received from readers show me that the message is getting through. They are surprised to learn that there are saints who had experiences like their own, and they are joyful to discover that even their most painful memories have meaning in Christ.

Amazon's website used to have a feature that showed which passages of My Peace I Give You were most popular with those who were reading it on Kindle. According to Amazon, the most popular passage in the book is, “All suffering contains within it the opportunity to become more like the One who suffered on the Cross.”

Stay posted at The Dawn Patrol for updates coming soon about the final days of my recent India trip and my new memoir, Sunday Will Never Be the Same.
Posted by Dawn Eden Goldstein at 10:50 AM