Where Peter Is publishes my critical analysis of In Sinu Jesu 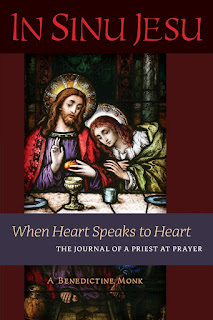 When the popular spiritual work In Sinu Jesu was published in late 2016, I paged through it in a bookshop and thought it was a pleasant, if rather intense, apologia for Eucharistic devotion. Recently, however, a conversation with a priest friend led me to take a second look at the book of alleged private revelations given to an anonymous "Benedictine Monk."

The priest told me about some serious pastoral issues occurring in his diocese; the bishop had disciplined a few priests who were promoting spiritually harmful practices. I asked whether the priests involved were reading a particular book, and was told that they were. It was In Sinu Jesu.

I therefore decided to read the book in depth. What I found led me to conclude that a critical analysis of it was necessary so that those who might be attracted to its Eucharistic spirituality would be able to distinguish between what is true and laudable and what is erroneous and potentially dangerous.

My analysis of In Sinu Jesu will appear in four parts on Where Peter Is. Yesterday part 1 appeared; each day this week is to see a new installment until the fourth and final one appears on Friday. I pray that this analysis begins a needed theological and pastoral discussion of the work.
Posted by Dawn Eden Goldstein at 1:22 AM

Out December 1; pre-order from your local bookseller or from Amazon.